This follows the breakthrough success of Tia’s “Goodbye Princess” music video (MV), which achieved over 1 million views within 10 hours after its worldwide premiere. As of now, “Goodbye Princess” has garnered overwhelming support with more than 58 million views on YouTube within 12 days, far exceeding all previous global C-pop records. The overwhelming response underscores the borderless resonance of both the song and #EmpowerHer’s ‘Female Empowers Female’ initiative, marking Tia as a tireless advocate for female empowerment. 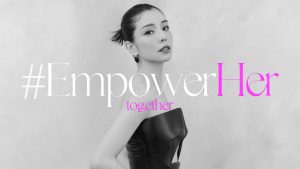 Tia is a tireless advocate for female empowerment

Tia Lee said, “I am so grateful for all the love and support for ‘Goodbye Princess’. I created it as a reminder that it is time for all of us – especially women – to embrace our strengths and rise up against the challenges that are holding us back. It takes a joint effort to achieve a truly inclusive and empowered world for all, which is why it’s so important that we all do our part to support charities and organisations like Teen’s Key in Hong Kong, who are doing incredible work in helping girls and women in need.”

The Resonant #EmpowerHer Campaign and What’s Next

The #EmpowerHer campaign is one of the biggest initiatives in the world to support female empowerment. For every viewing benchmark hit for the “Goodbye Princess” MV, a donation will be made to selected beneficiaries of the campaign, up to a maximum total of HKD3.8 million. This figure was chosen for its significance for the upcoming International Women’s Day, which falls on the 8th of March 2023.

Teen’s Key Hong Kong will be the first beneficiary organization after Tia personally pledged to support the empowerment of women worldwide. The MV’s views have an unprecedented number of views, reinforcing its meteoric rise – and the views are still pouring in. Other beneficiaries include the Daughters Of Tomorrow in Singapore and Beats by Girlz and Women in Music in the United States, as well as others to be named across the globe.

“We are proud and thankful to be the first recipient of the #EmpowerHer campaign, which represents everything that we believe in and fight for here at Teen’s Key – empowering young women to follow their own dreams. These funds will go a long way to supporting our work and enabling us to help more young women & girls. More importantly, we hope that the campaign’s message will spread throughout the world and inspire everyone to believe in themselves,” said Rachel Chow, Resource Development Manager, Teen’s Key Hong Kong.

The Power of the Global #EmpowerHerDance Inspires Awareness Through Dance with the Most Popular TikTokers in Australia, New Zealand, Middle East and the UK leading the charge

International female dancers and prominent influencers around the world have rallied around the #EmpowerHer movement through the #EmpowerHerDance dance challenge, which was inspired by “Goodbye Princess” and has taken TikTok by storm.

Australia’s most popular creator on TikTok last year, Hannah Balanay was the first to cover the song’s distinctive choreography with the signature ‘goodbye’ hand wave, followed by Judah Metu-Teakura in New Zealand, J Lou in Hong Kong, and Leen Mohammed from the Middle East whom are all the most popular TikTokers/KOLs in their respective regions. Evie Meg from the UK has also joined the challenge. J Lou’s #EmpowerHerDance Challenge IR Reel video received more than 230,000 views within 24 hours, while Leen Mohammed’s TikTok #EmpowerHerDance Challenge video received more than 270,000 views within 24 hours of release. With people across the globe having viewed their dance videos to date, new covers continue to be posted on the platforms every day under the #EmpowerHerDance hashtag as more step up for the cause. 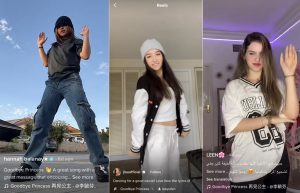 (From Left) Hannah Balanay in Australia, J Lou in Hong Kong, and Leen Mohammed from the Middle East

Last month, the pre-release campaign for “Goodbye Princess” featured a 6-part animation series that told the story of Tia’s journey in the music and entertainment industries, as well as her subsequent reinvention.

The full series and complementing fashion videography can be watched on Tia’s social media channel.

Tia Lee (李毓芬), born in Taipei, is a global C-pop singer, fashion icon and film and television actress. In addition to her acting roles and musical career, Tia appears frequently at major fashion shows. As a trend-setter, Tia has graced the covers of fashion, beauty and lifestyle magazines such as Vogue, Elle, Marie Claire, and shares her beauty and fashion tips through a number of Vogue’s social media channels.